In January of 2013 Amanda Griffin, a soapmaking instructor from Texas, traveled to Haiti with Marla Bosworth to help teach a single soapmaking workshop to a group of women that lived in Port au Prince, Haiti. These women were living in tents - some actual tents and some sheets or tarps hung up with pieces of wood to form shelters. Tent City is where she met the resilient women of OFEDA, a group of amazing women who had banded together after the earthquake to form an organized group. As a group, they would meet to discuss issues, to support each other and to make plans. They decided that they would start businesses to work towards prosperity and change their situation. Their first business was a card making business where they hand embroidered adorable cards with brightly colored thread to form flowers, animals and greetings. They soon wanted to add a soapmaking business. The first soapmaking workshop with OFEDA took place on January 12, 2013 which happened to be the three year anniversary of Haiti’s devastating earthquake which flattened most of Port au Prince and killed several thousands of people. On a day representing such destruction, pain and death, the women of OFEDA came together, sang a song, made a prayer and the workshop began. They soaked up every bit of instruction and were soon mixing lye into water, scooping and melting oils and stirring while singing their beautiful soap to trace. As they poured it into the molds, they smiled and laughed with excitement and accomplishment. The next day as the unmolded and cut the soap they carefully and gently passed it around so everyone could touch it and smell its wonderful fragrance.

This workshop represented their push for prosperity, change, hope and a brighter future.

Upon returning home, Amanda realized that it was going to take a huge amount of support for these women to turn the basic knowledge of soapmaking that she had left them with into a business. It was going to take return trips, more supplies, better supply sourcing, business support, wholesale support, packaging support, pricing support…much more education and support was required if they were going to actually do this and make money. The idea of the Lovin’ Soap Project was born.

The Lovin’ Soap Project would bring industry experts together to offer their expertise and mentoring to these beautiful women in Haiti.

The organization would raise funds that were so desperately needed for travel and supplies, it would provide written and translated manuals and other documents including batch sheets, recipe sheets, it would provide an outlet to market and help sell the soap and most importantly, it would help tell the story of these beautiful women and rally a whole community of industry support and movement.

Amanda returned to Haiti in March and May of 2013 to continue working with these women and to continue sourcing supplies and ingredients.

Owning his own business, Benjamin had years of experience in setting up a business, creating goals for a business, setting up procedures and processes for production, creating a product line and more to support these women turning their basic knowledge of the craft into a money making venture. In August of 2013, the Lovin’ Soap Project was officially incorporated and applied for 501(c)3 non profit status.

Amanda and Benjamin started forming a team to help tackle the duties related to running the Lovin’ Soap Project and turning it into a worldwide organization with global outreach. Courtney Melton was added as corporate secretary, but more importantly…she serves as our Gatitude Coordinator. Her job is to make sure our supporters know exactly how much we appreciate their support. Charlene Simon was brought on as our PR and Retail Partner Manager. Charlene is organizing an annual fundraiser in Hot Springs, AR. Tanya Rasley joined our team to handle our online community and social media efforts. Her job is to utilize all of our social platforms to keep our community up to date with what is going on and what their contributions are doing to help these women in Haiti and other areas of the world. 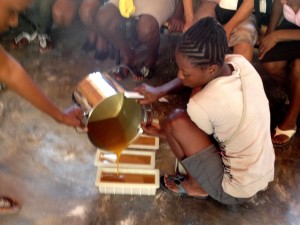 In July of 2014, Benjamin and Amanda traveled to Uganda to teach a group of women, part of Project Lydia, soapmaking.  The day that they left they received word that they were approved as a 501(c)3 nonprofit organization.

This trip served as Lovin’ Soap Project’s first expansion into another country.  We are also looking at India for the fall of 2014 and South America in early 2015.

Thank you to all of our supporters, friends and family who follow this project.