“The Place Where Projects go to Die”

Since I first began traveling to Haiti, I have heard more than a few people refer to her as the “place where projects go to die.”  But why?  I’m sure there are many reasons, however I believe there to be three at the core:

Even though Haiti is the poorest country in the western hemisphere, it can be paradoxically expensive to travel to and move about the country, especially if you do not know the native Haitian Creole language. The social, civic and environmental conditions in Haiti, especially in her capital city Port au Prince, are completely vanquished by external circumstances.  The vast amount of destruction the earthquake left behind was truly immense, and nowadays very much disremembered in the eyes of the developed world.  There is a very palpable feeling of “yuck” when discussing the current conditions of Port-au-Prince and other urban areas of Haiti with fellow non-Haitian helpers that hail from developed countries who come to provide aid for a few days or weeks.

And though the people of Haiti are beautifully giving and kind, there are certain areas that can be considered a domicile of tourist/outsider harassment, such as the airport, busy streets and beaches.  But in order to see through this small, completely innocuous section of social discomfort, it is important realize why this is the case.  The occurrence of this perceived agitation is directly tied to the exclusion of small business entrepreneurs within the nation.  The residents of Haiti need money, and they are willing to push to make transactions.  The inability to find work through “traditional” means creates a massive uptick of street vendors, prostitution, and folks just plain looking for money.

Reaching this level of understanding is crucial in order to see past the societal interactions, exchanges and confrontations that are different than your own.  Moreover, tourist harassment in Haiti is nothing compared to other underdeveloped/developing countries.  Take Haiti’s Caribbean neighbor Jamaica for example.  According to Grace Ann Cornwall and her team in a report titled, The Challenges of productivity and Competitiveness of Women-owned Enterprises in the Caribbean: A Jamaican Case Study, “Tourist harassment represents a significant social problem to the local tourism industry. Wallace (1998) indicates that between 58%-60% of tourists were harassed on the streets, 36%-40% at the airport and the remaining 20.4%-22.8% were reportedly harassed on the beach.”  This has never been an issue with our travels to Haiti. People have been open and kind, and while we have yet to spend an extensive amount of time there (in the form of weeks), this is the last thing that is ever on my mind while in country.

And just so we’re clear, there isn’t too much “tourism” going on in Haiti these days, except from perhaps the safety of Caribbean cruise ships that land in the lip-sticked, delightful little figuratively walled-off section of the island, creating a complete social fabrication within the border that is Haiti, such as Port Labadee.

So, some of the roadblocks to assisting Haitians in Haiti are 1) money, 2) poor living/working conditions, and 3) forbidding social situations.  These barriers are very real, and they can present a blockage in the tangible, physical means to help people in foreign nations.  But if you do have the means to help others, always remember that borders are nothing more than invisible lines.  A small little book with your picture on it can get you anywhere you want to go on Earth, so we should all go take advantage of the many opportunities that we can provide others in ways that we ourselves in the Western (and developed) world perhaps take for granted.

But the reality is, we have jobs, families and bills.  Traveling to a place like Haiti, even with a group, can be quite a challenge, financially and otherwise.  You may not be able to take the voyage, but that doesn’t mean you can’t help others get there:

Explore Within and Dare to Help

There is an abundance of helping platforms that we all can get involved with that will make significant change for countless people.  The LOVIN SOAP PROJECT travels to Haiti and is currently working with two different women’s cooperatives in a variety of ways, teaching the artisan craft of soapmaking being the principal objective.  In addition to formula creations and saponifying fatty acids, the LOVIN SOAP PROJECT also teaches the power of goal setting and how to create business practices and record-keeping modules to help them start and grow their current or future business.  We will also be expanding these intents into Uganda in July of this year, where we will be working with a women’s cooperative called Project Lydia.  By investing in the LOVIN SOAP PROJECT, you are investing in a women-operated assembly, which will ultimately advance and empower women by learning a trade.  And by women learning the trade of soapmaking, health and hygiene are promoted and sustained on the family and community level, which is of vital importance in Haiti and other developing countries.  Beyond the local community, the LOVIN SOAP PROJECT ultimately provides aid to women’s collectives by reducing poverty over time and promoting sustainable development in the economy.  Through the project’s direct involvement, education is elevated, the health and access to programs and services of women and their families are improved, and ultimately, opportunity is being initiated and seen through.

If the roadblocks to helping Haitians in Haiti are indeed too much to overcome, you can help the smart, strong women of Haiti by donating at www.lovinsoapproject.org.  We can be your eyes and ears on the ground.  We can incur the trials and travel in order to advance the cause for all – which is not necessarily always a fun and whimsical experience.  These women are poor—poor like the large majority of the West (and developed countries around the globe) just cannot comprehend.  No one deserves to live in the circumstance and conditions that these women have lived in for over four years now.

Success is an Obligation: The Lovin’ Soap Project Will Not Die in Haiti

We refuse to let this project die in Haiti as many do.  We are here to assist, motivate and create opportunity for others, principally women. 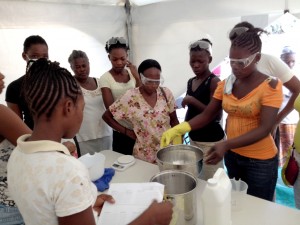 By creating a scenario both in underdeveloped countries, as well as industrialized nations where women become business owners, we can collectively help in eliminating gender inequality and empower women.  We are a proud part of a growing notion that says empowering women through business creates not only revenue generation, but also an entire global investment concept.  What we hope our audience, donors and all interested parties understand is that though our organization is a not-for-profit establishment, the objective of the on-going, never-going-to-die project is to create very real, tangible measures of success in the private business sector for the women that we are teaching.

The global marketplace does not make exceptions for sad stories.  The engagement in the economic empowerment of women in Haiti, Uganda and all other developing countries and emerging markets is our duty, and it is a ton of work.  The personal, collective and financial success of the women we teach is how we as an organization measure our success.