“The future belongs to those of us, female or male, who can adopt and embrace the feminine archetype.” ~John Hagel III

Women are the Human Resource 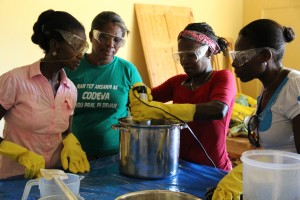 Women make up roughly half the population of every sovereign nation across the globe.  When discussing the marketplace and the private sector, we talk in terms of human resources.  No, not that department at a mid to large size business that handles employee grievances; we are using the term human resource to elucidate that each individual human has an actual supply of energy that can be used in the workforce that furthers the economy.  If approximately half of each population in developing countries is not allowed to contribute to decision-making or put in headship positions, then the economy, the possibilities of social progress, and the overall respect from trading partners (other countries) all suffer greatly.

The current temperature of the economic condition in the United States is reflective of the rest of the world.  The dialogue is one of budget crisis and natural resource shortages, which will drive up prices and scare off consumers.  These current circumstances run parallel to the rest of the globe, as we are an interconnected, global economy.  We are now, as we have been in the past, in financial dire straits.  But the human condition is one of progress and it always has been, which is why now more than ever the means to navigate through the global financial watersheds that affect so many people is to utilize the talents of women in the worldwide marketplace. We are passed the “show-off” stage.  Having women in leadership positions is no longer just a commitment to diversity for the sake of the word.  We need the leadership of women in all facets of the workforce, and when I say “we,” I mean the planet.  “Greater representation of women in senior leadership positions within governments and financial institutions is vital not only to find solutions to the current economic turmoil, but to stave off such crises in the future,” says Klaus Schwab, Founder and Executive Chairman of the World Economic Forum (WEF).  No matter the country, and no matter the size of the business, we will all socially and financially prosper if more women operate as leaders.

It is human capital that will create a new paradigm in how the world economy and her potential for growth will thrive.  Our economy is not run on oil and gas – it is run on knowledge.  Furthermore, when we talk about the economy and advancement of gender diversity in the global marketplace, we must take into account that women now, and in the future, have far more buying power than ever before.  And because the choice-making preferences of women differ than men’s, it stands to reason that our global investments and ventures will transform and even revolutionize.

What This Means in Haiti

Several nations around the globe have passed laws that mandate equal treatment for women.  Though many countries that boast this social alteration did so with a welcomed sense of accomplishment from the populace, it was done because governing bodies know how much their economy needs women.  And just like any other cosmic shift in societal norms, it is two steps forward, one step back.  Women have not been fully integrated as prominent economic performers, even in developed countries such as the United States, let alone developing nations such as Haiti.  Though sheer numbers will show that women are indeed acting members in the workplace, they have not reached a proportional position as leaders and decision-makers in many industries.

Haitian women have equal constitutional rights as men.  By the book, women have the same economic, political and cultural freedoms and authorities as men.  But of course, reality differs.   Much like other developing (and developed) countries, Haitian societal and cultural patterns towards women are discriminatory and in some cases, recurrently laden with violence, as women are viewed as inferior.  Discrimination against women is an edifying base in Haitian society.  This does not mean that all men are women-beaters and evil – far from it – but there is an overwhelming sense of superiority over women that men grow up with in Haiti.

Besides of course the horrors and atrocities of violence against women, the root of malevolence in Haiti as it pertains to gender inequality is the lack of equal access to education.  The “International Human Development Indicator” report from the United Nations Development Programme (UNDP) allows you to dig, scrap and unearth different indexes of data per country, based on the “Human Development Report Datasets” that were compiled and published in March of last year.  The overall performance of each country was graded on human development as either: 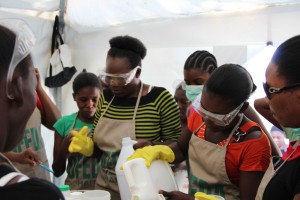 Without education and training, the women of Haiti cannot possibly be vital members of the economy, which is what Haiti needs now more than ever.  Most of the soapmaking group that in-part make up the women’s cooperative, OFEDA (Organisation Des Femmes Dovouees En Action) do not know how to read and write.  Can you imagine trying to start a business with little or no comprehension of the written language?  And just like any products-based business, it’s a numbers game – which is much easier to understand if you can count, which certain women within the group cannot do.

That is the current reality of our situation.  It is imperative to recognize here that these women are immensely smart and incredibly resourceful – they just have not had the opulent, much over-looked and insanely taken-for-granted privilege of being educated and trained.  The flipside to this socially revolting coin is the group’s willingness to be taught, trained and show enormous extents of entrepreneurial initiative.  These women have been trained how to make soap, and for those who do not know how to saponify fatty acids, I will spare you the details of their crafty, artisan endeavors – what is important to grasp here is how actively engaged and hungry they are to succeed at not just soapmaking, but business.  Along with the plight of thousands of Haitians still living under tarps and tents since the January 12, 2010 earthquake, these women are developing themselves into leaders and purveyors of success, though it is still just a whisper in the eyes of the rest of the world.

The women of OFEDA have a long way to go.  The growing pains of a start-up business in a developing country is agonizing enough.  But the women of OFEDA live in repulsive daily conditions and they have developed through attrition a sense of urgency for the day, whereas in developed nations, we have the benefit of planning and developing a strategy for the future with far less external and very real pressures bearing down on us. Talent is playing the biggest role in the new global economy – not resources, manpower or old start-up strategies.  Back in November, I visited OFEDA and we talked about the power of goal setting.  We decided that they were completely capable of making and selling at least 500 bars per month, beginning in January.  We went back in January.  They placed each log of soap on a folding table, one by one, until the table collapsed under the weight of the soap.  Their talent met their drive and determination to complete the goal.  Now it is a matter of them selling it to buyers around the globe.  This part of the process is tumultuous, but this is where we are now.  They have exceeded all of our expectations in talent, skill and fortitude.  The women now have a tough row to hoe, especially from within, as each organization and social entity must work together cooperatively to make great strides, and their pressures and considerations are grave.

Furthermore, as these women own and run a soon-to-be successful manufacturing business, we can proudly and conclusively say as an organization and as a member of the global community that women leaders and women consumers are no longer a niche market.  Women are the future of business, commerce and productivity in our increasingly globalized world – and these smart, driven and hard-working women in a forgotten tent camp in Port au Prince will be on the forefront with their products and contributions.  Female ownership and leadership of businesses and industries around the world, whether in developed or developing nations should no longer be viewed as a personal virtue.  We are passed that.  And if you reside in a developed and globalized nation, do not lose sight of the fact that around the world, many nations are still playing catch-up when it comes to gender equality.  No, female leadership is not a personal virtue for a society to hang their hats on; it is a business imperative, and the women of OFEDA will make a real impact on their bottom line, the bottom line of Haiti, and the bottom line of the smart investors, donors and buyers that create relationships with them.